skip to main | skip to sidebar

So I'm going through the links on my computer and I stumble across this blog...  Totally forgot about it!  Now I feel guilty that I haven't actually used it for almost two whole years!

That's pretty bad, too, because I'm working on so many projects that I could be telling everyone about!

First of all, I'm trying to re-embark on my writing career.  I've had several short stories that have been published in a variety of magazines and ezines and anthologies.  That was a few years ago now, and all the rights have reverted back to me, so I've decided to reissue them through a couple of epub distributors like Amazon Kindle, Drive Thru Fiction, and maybe a few others.

I'm also trying to start a couple of series of short stories for publication on these platforms.  This is becoming a larger project than I originally anticipated.  Not only do I have to reformat all the stories, sometimes for different formats, but I also have to come up with cover images.  I am making progress, it is slow but steady.

Technically, I am still creating paper miniatures for Fantanomicon Press.  In fact, I have two different sets that I am in the middle of.

On top of all that, during a great lapse in my better judgement, I decided some months ago to embark on a web-series project.  This is a MONSTER-SIZED project all by itself.  It's a retro-style space fantasy adventure inspired by old serials like Flash Gordon and Buck Rogers.  I've been watching and reading various tutorials about the various aspects of making videos and/or movies.  There's script writing, costume design and creation, prop manufacturing, special make-up design, and then there's the video and audio stuff!

These are some of the things I feel I could and should be talking about here on my blog.  I could also give little mini-reviews of some of the old pulp magazines and classic sci-fi and fantasy novels that I read.  Or voice my opinions on some of the new or old movies I see.

You know, all that kind of stuff that people talk about on blogs.

I think I shall try to do that in the near future.  Hopefully this will be fisrt of some more regular posts.  Let's see if I can come up with the time and energy to keep it up! 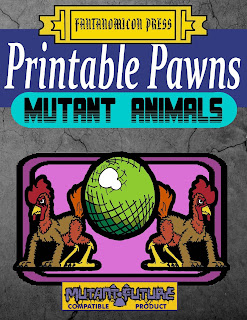 The ruined cities and desolate wastelands of the post-apocalyptic future play host to innumerable dangers. Bandits and raiders lay in wait to rob and kill passersby. Mad mutants and radioactive zombies lurk among the ruins and wastes.

But not all dangers come in the shape of Man. Radiation fields ravage the bodies of the unwary souls unfortunate enough to wander in. The fallout has also affected the animals of the world, twisting and mutating them into newly fabulous and dangerous creatures. Creatures like the Chicken Wolf, the Giant Bee, the Leech Rabbit, and the Insectoid Eye.

This set contains four different monsters inspired by the Mutant Future ™ RPG from Goblinoid Games. These figures come in THREE different construction styles: A-Frame, T-Frame, and Based Figures for swappable bases. In addition to the colored characters, there is also a printer-friendly black-and-white version suitable for your own custom colors. All figures are 30mm scale. 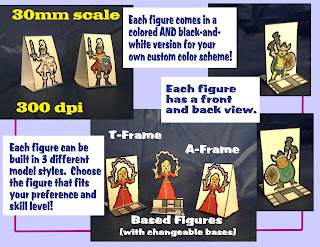 First I want to wish you all a Happy New Year!

Then, I want to announce a new release from Fantanomicon Press.  This is a new set of Printable Pawns intended as a complement to the Rugged Adventurers set. 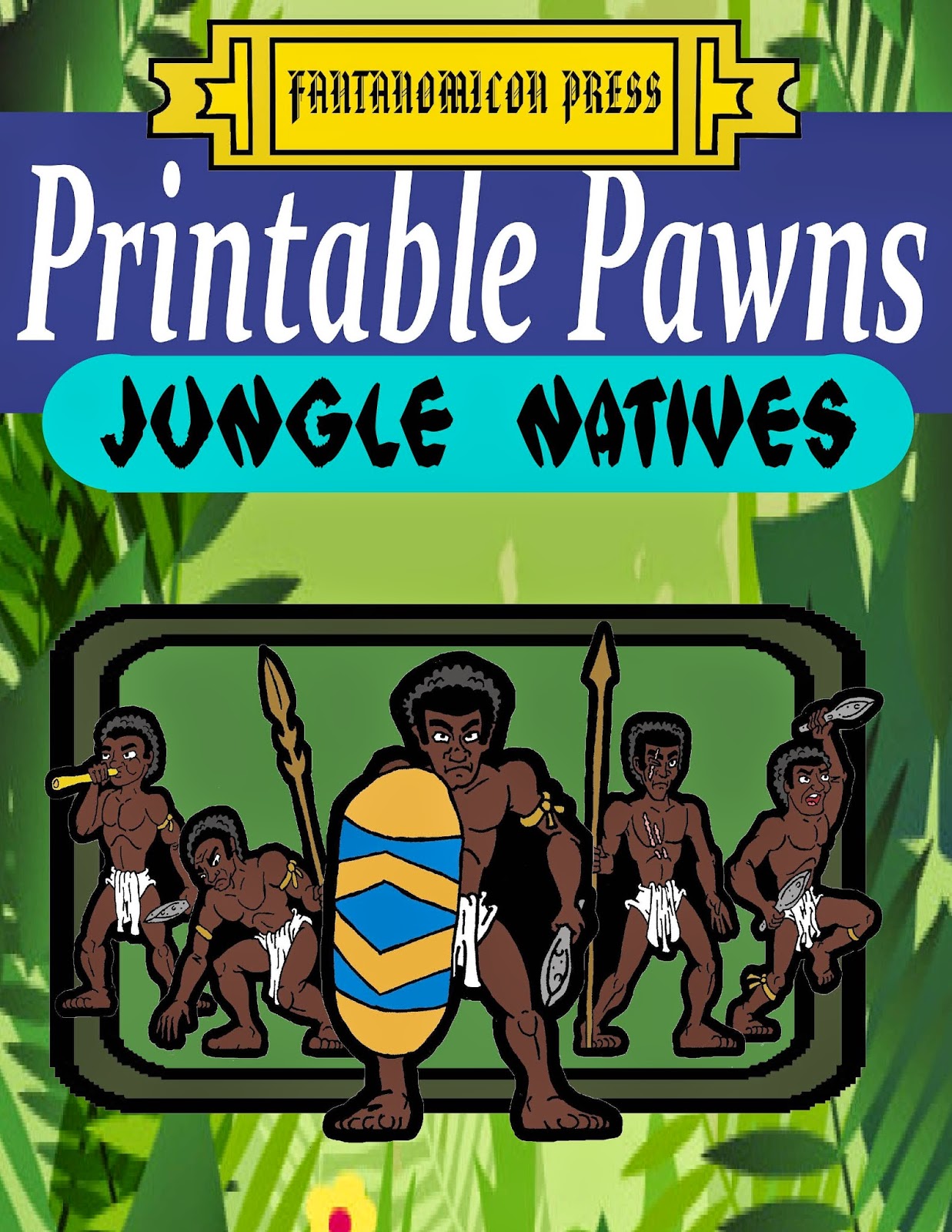 Do your explorers need some locals to guide the safari?  Or perhaps a band of hunters are stalking them for trespassing across sacred tribal lands?  Perhaps you need the descendants of a lost civilization, swallowed by the jungle and forgotten to the world?
Natives.  They could both help or hinder a party of players.  They could be allies of the Lord of the Apes, or protectors of the Queen of the Jungle.  Or perhaps they are the guardians of the legendary gem known as the Heart of the Fire God.  Whoever they are, no jungle from any pulp story was complete without them. 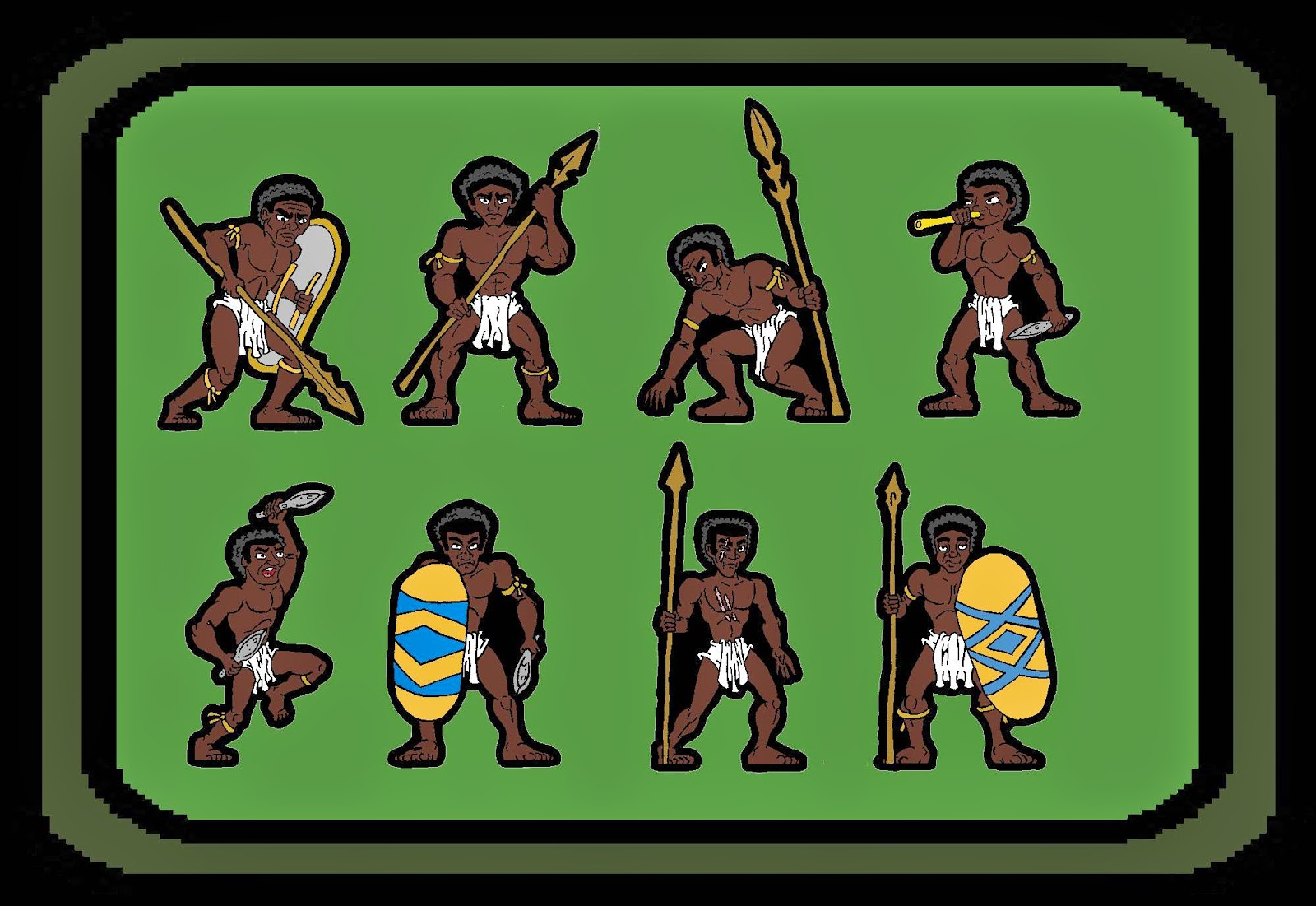 This set contains eight different characters suitable for pulp games.  These figures come in THREE different construction styles: A-Frame, T-Frame, and Based Figures for swappable bases. In addition to the colored characters, there is also a printer-friendly black-and-white version suitable for your own custom colors.  All figures are 30mm scale.

Click HERE to purchase!
Posted by Timothy A. Sayell at 4:34 PM No comments:


Well, it's that time of year again....  We've put away the leftover turkey and that means it's time to begin the holiday shopping!  So here at Fantonomicon Press, we're starting our Cyber Monday Sale a little bit early and we've knocked all our Printable Pawns down to

50% OFF ALL Printable Pawns!

Now is the time to get ém folks, so act fast because this sale ends Monday night!


Happy Holidays and
Good Adventuring from

Well friends, it's that time again.  Where does the year go?  It seems like we just ushered in a new year, and yet we just put away leftover turkey.  And if we put away the leftover turkey, that means it's time to start shopping for the holidays.


So with that in mind, I'm announcing that I, too, am holding a Cyber Monday sale on all the eBooks that I sell through DriveThru Fiction!


Both Strange Worlds of Lunacy and A Fistful of Hollers, two humor anthologies originally published by CyberAliens Press and sold at a retail price of $5 are on sale for LESS than HALF price!


Abandoned Towers Presents the First Annual Artist's Challenge, a fantasy anthology inspired by a painted by fantasy artist Johnney Perkins.  Originally published by Ancient Tomes Press and sold at a retail price of $5, now on sale for LESS than HALF price!


The Alphanauts' Legacy, a Bradley Brackett space adventure, published by Fantanomicon Press and sold for $3, is now on sale for 25% OFF!


The sale runs through Monday, so NOW is the TIME to GET them!


Just click HERE to go to the store page!

Posted by Timothy A. Sayell at 9:15 PM No comments:

John Neptune Season 2 and Beyond


If you've been tuning in, you must be wondering what lies in store for our hero and how the war on Tivas is going to turn out.  Well, I'm pleased to report that Season Two is on the way:


Also, further adventures are planned for John Neptune and his cronies.  But help is needed to make these adventures come to pass.  That's right, only you can help John Neptune save the galaxy:


And just clarify--I am NOT affiliated with Neptune Cinema.  I am NOT part of the creative team behind the show.  However, I AM a fan who is trying to be supportive and help spread the word to those who might be interested!  Enjoy!
Posted by Timothy A. Sayell at 10:55 AM No comments:


Just a quick FYI to everyone out there:


Labor Day is coming and that means Labor Day Sales!  Well, Fantanomicon Press is having one, too.  For a limited time, ALL sets of Printable Pawns are available at 25% OFF!


So if you're missing a set, now is the perfect time to get it from the Fantanomicon Press Store on DriveThruRPG!  But you've got to act fast, because the sale ends soon!

Posted by Timothy A. Sayell at 5:08 PM No comments:

Timothy A. Sayell
I write adventure stories. Some are sword-and-sorcery. Some are space opera. Some are pulp hero style. Some are post-apocalyptic. Some...are a little harder to classify. But they all have lots of action and excitement. So...what's your poison?